She expected to be turned away from the services that the Domestic Violence Intervention Program promised to provide because things weren’t that bad. Like so many calls our advocates take she was sure there were others that needed our help more than she did, because of the years of abuse she downplayed the hurt and fear she lived in every day.

The first time she spoke to someone was when her sister had dialed the 800 number she had seen on the billboard on her way to work. After a few rings, an advocate had answered and Samantha’s sister handed her the phone. Samantha was embarrassed and had no idea what to say, she apologized for bothering them and for her sister’s meddling. The call lasted only a few moments but she felt better knowing they were there.

The second time was after she found her tires slashed in the driveway, the night before there had been a big fight about how much she had spent on groceries and Todd, her 7-year-old son’s, medicine. She felt crazy and just wanted someone to talk to. Could her husband have done slashed her tires? She had no way to get to work. There were no buses or cabs to take and she couldn’t ask him for money to fix the tires, it would surely be her fault again but she hadn’t left the house in two days. He always told her that she didn’t pay attention or care about the things he bought them. Samantha could hear his voice echo in her ears; stupid, dumb, careless baby.

The third time she called was after her husband had left for work. She had lost her job months ago after calling in so many times and he forbid her to find a new job, she was stuck with no money for food, no car, and nowhere to turn. Children had witnessed their argument the previous night which had turned physical and terrifying. DVIP advocates listened and offered to help her safety plan for the future.

Samantha and her three children fled their home after the violence continued to escalate. 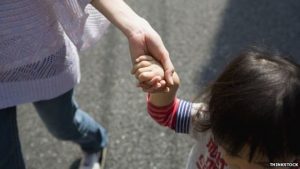 When they arrived at the DVIP office to meet with an advocate, Samantha shared that she was able to pack minimal items for her three children, 5 and 7-year-old boys and a newborn, she had their favorite stuffed animals, and a couple of pairs of clothes but nothing additional, no food or household items, and only $25 in her pocket as her husband had meticulously managed all of their finances and continued to forbid Samantha from working outside of the home. Samantha’s advocate was able to reassure her that what she and her children needed would be provided by DVIP at no cost.  A roof over her family’s head, medicine for her 7-year-old, a winter coat for her 5-year-old, diapers for her baby girl and everything in between.

The reassurances that our advocates are able to provide clients like Samantha are only possible because of the continued support of our communities. The generosity, food, clothing, and monetary donations made every day by our supporters help not only families in Iowa City but in Keokuk, Burlington, Danville, Marengo, and everywhere in between. Please visit our donation page dvipiowa.org/donate to make your contribution today. If you would like your donation to support your neighbors, please denote so in the comment section.