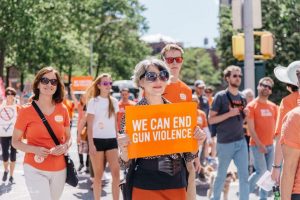 Americans across the nation will honor victims and survivors, and make a commitment to work together to end gun violence on National Gun Violence Awareness Day.

Why does DVIP partner with Everytown/ Mom’s Demand Action? Because they fight for the safety of victim/survivors!

The event begins at College Green starts at 10:00, with speakers and song at 10:30. An orange juggler, a Wear Orange Photo Booth, and other delights await!